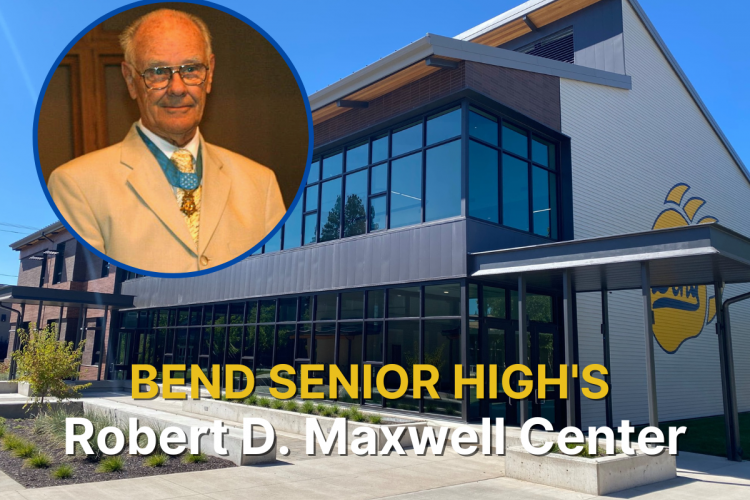 
On Thursday, Nov. 10, Bend Senior High School will host a special dedication ceremony for the school’s new Robert D. Maxwell Center as part of the school’s Veterans Day events. Veterans from throughout the community have been invited to attend the event alongside students and staff to honor Maxwell, who taught automotive at Bend High and received the Medal of Honor for his service in WWII. The Veterans Day events also include an interactive student assembly, with the awarding of an honorary high school diploma to a veteran, the unveiling of a new monument to Maxwell and a flyover from military aircraft.

“We wanted to go all out with this year’s Veterans Day recognition in order to honor the incredible contributions Robert Maxwell made to our school, the broader community and to our country,” said Principal Christopher Reese. “His character withstands the test of time. He was a phenomenal teacher and human. It was truly an honor to get to know Bob Maxwell and all he represented.”

Reese says staff, students and veterans in the community are excited for this opportunity. The events include a school-wide assembly, during which veteran Jerry Kirkpatrick will receive a high school diploma. The crowd will then move to the Maxwell Center, where there will be a short dedication ceremony that includes the unveiling of a new monument for Maxwell. The event will conclude with a flyover by military aircraft.

The Maxwell Center, which was part of Bend-La Pine Schools’ 2017 school construction bond, opened to students in September. The building, which sits on roughly the spot where Maxwell taught automotive classes for decades, includes a large multi-purpose room and four classrooms. It is part of the phase one of the master plan outlined for the school.

Maxwell, often referred to as the most decorated veteran in Oregon history, left school during the 'Dust Bowl' days of the Great Depression and served in the U.S. Army during WWII. He was awarded a Congressional Medal of Honor for selflessly falling on a German grenade during the war, thus saving the lives of the men around him.