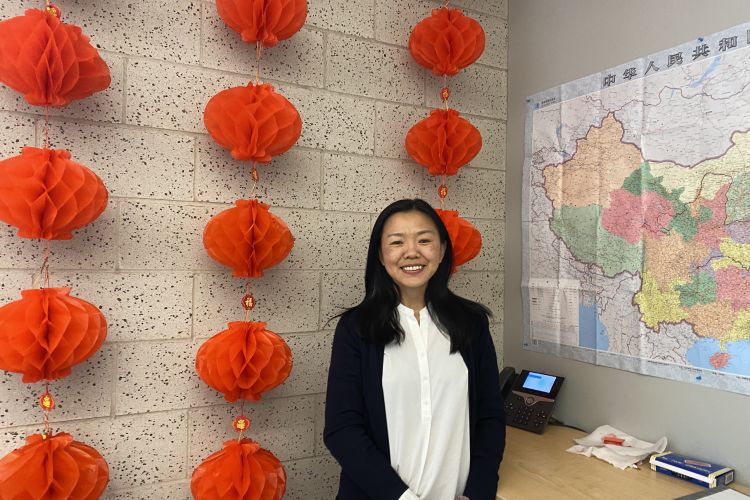 Sharing Her Passion for Chinese Language


Lin Hong is hoping to change people’s perceptions about learning Mandarin. The Caldera High School teacher says it’s not as difficult as some folks think.

“People are terrified of learning Chinese characters, but learning Mandarin is not any more difficult than any other language,” said Lin.

Lin loves teaching the language and sharing Chinese culture with her students. Lin not only teaches two sections of Mandarin at Caldera, she also leads the Mandarin program at Central Oregon Community College (COCC). On top of that, Lin is also serving as an Asian Family liaison for Bend-La Pine Schools this year.

Especially at the high school level, Lin finds that students want to learn about Chinese culture in addition to learning the language, which is fun for her, as she enjoys sharing her heritage and culture with students.

Lin says learning Mandarin is a steep learning curve at the beginning, because the structure is so different from English and other western languages. But once students become familiar with the characters, they learn much faster. She also believes it is excellent for students’ brain development to push themselves to learn in a new way.

“It’s a mindset training. At first they may complain because they are experiencing something they are not familiar with, but then they start to see the logic and by practicing different strategies they can learn,” she explained. “My goal is to help students realize that people from different cultures are different, but the difference is not something wrong. The students are finding common ground and respect for difference.”

Lin grew up in environments with a mix of cultures; the town where she was raised is in the far northeast corner of China, near the Russian border, which had previously been colonized by Japan. That mix of Japanese, Russian and Chinese culture, was built into her city and experience.

Linn points to the city in China where she attended college and graduate school, saying it was a wonderful mix of many cultures.
Lin studied Chinese language and literature in college and then Chinese linguistics in graduate school in China. In 2014, Lin became a visiting scholar at Pennsylvania State University and then, in 2015, moved to Bend to start the Mandarin program at COCC.

She says she’s had a great experience in Central Oregon, starting with her second day in town. When her car broke down, a couple not only stopped to help, but also took her to a part supply store to purchase a new hose and helped her install it.

“That’s a good feeling. People are really welcoming,” said Lin. “All the people I’ve been working with are very open minded. They may not know very much about my culture, but they are willing to learn.”

In her new role as Asian Family Liaison, Lin gets to help welcome new families to town and share some of that connection and understanding. The position is a new one in the district, as our Chinese community continues to grow. Two years ago, the group formed the Chinese Culture Club, which meets once a month.

“My main goal is to help smooth communication and to build connections.”

“We take care of other people and think about others before we think about ourselves. We want to contribute to the community,” said Lin.

And for her, giving back is part of her work.

“I received a lot of help in Bend. It’s time for me to give back and to help my students and help families,” said Lin.

Her favorite moments are when she’s able to see her students thinking seriously about their futures.

“My students have a lot of big dreams and I’m here to help support them.”