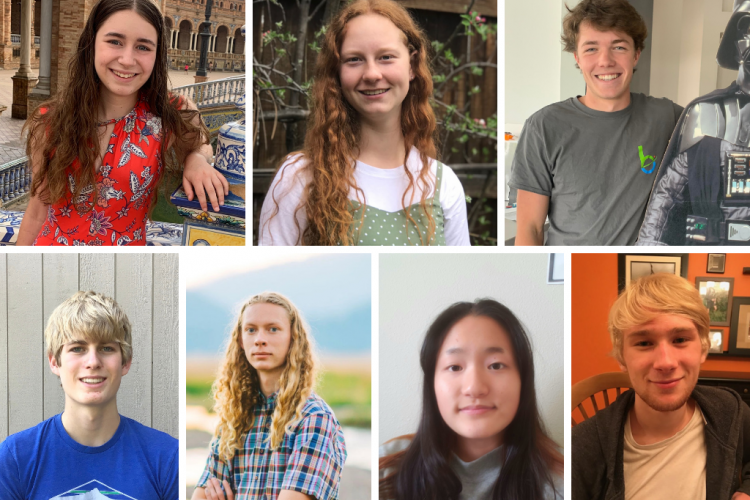 “We are proud of this outstanding accomplishment by these dedicated students, who have clearly pursued academic excellence,” said Interim Superintendent Lora Nordquist.

Grace, 18, is fascinated with languages, and plans to become a translator/interpreter. She would like to attend either the University of British Colombia, the University of Oregon or another Pacific Northwest university, where she plans to study modern languages, specifically Spanish and French. Grace enjoys playing the piano and singing in the choir, and also runs cross-country.

Kylie, 17, plans to go into biomedical engineering, and will attend a four-year university next fall. Kylie is a cyclist, and races cyclocross and mountain biking for Cascadia Junior Cycling. She has also volunteered as a coach for the organization’s youth programs. In addition, Kylie was a NASA SEES (STEM Enhancement in Earth Science) intern on the Mosquito Mappers team this year, and in her free time enjoys sewing and painting.

Kent, 18, would like to one day become a college professor, and has plans to study physics in college next fall, though he’s not yet sure which university he’ll attend. Kent plays tennis, enjoys computer science and tutoring, and has been a camp counselor at the Bend Science Station.

Chase, 17, dreams of being a computer programmer as he loves all of the math that’s involved in the subject. He’ll start by studying computer science in college, though he’s not yet sure which one. Chase is also an accomplished rock climber, and has competed in competitions at the national level, and enjoys playing classical guitar and camping with his family.

Alex, 17, conducts independent research at the Bend Science Station, where he currently is looking at how to combat ocean acidification. Last year, he conducted research on European Honey Bees. Alex is also active in Speech and Debate. While Alex is not yet sure on where he’ll attend college next year, he is interested in studying applied mathematics or physics, and would like to either pursue a PhD in a STEM field and go into academia, or pursue law after undergraduate study.

Hannah, 17, plans to study mechanical engineering and is currently applying to colleges. She is active in the Diversity and Equity Club, the Spanish National Honor Society and Summit Winds, and enjoys philosophy, knitting, and the comfort of a rocking chair.

Owen, 17, dreams of becoming a computer programmer, and as such plans to study computer science in college, though he’s not sure yet which one. Owen is also active in robotics.

Of the more than 1.5 million high school students who took the Preliminary SAT (PSAT), 16,000 – less than 1 percent – are recognized as National Merit Semifinalists. The nationwide pool represents the highest scoring entrants from each state.

Finalists from this group will be selected in February. To become a finalist, the semifinalist and his or her high school must submit a detailed scholarship application, in which they provide information about the semifinalist’s academic record, participation in school and community activities, demonstrated leadership abilities, employment, and honors and awards received. Finalists will be considered for National Merit Scholarships, which will be announced in the spring of 2021.

For more information about the program, visit www.nationalmerit.org.