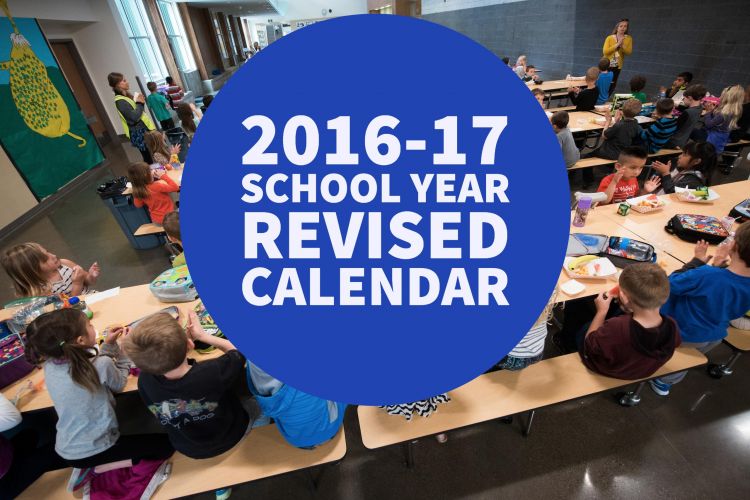 Changes Made to Add Instruction Time

Bend-La Pine Schools Superintendent Shay Mikalson announced changes to the 2016-17 school year calendar today.“After meeting with the state Deputy Superintendent of Public Instruction, hearing from local families and meeting with employee group leaders, we have developed a revised school calendar that recovers valuable student instructional time without further extending the end of the school year,” he said. “With the extension of several school days in March, which were originally slated as School Improvement Wednesdays (SIW), and the elimination of some traditional conference time in exchange for more flexible communication with parents this spring, we are able to recover several days of lost classroom time for students.”

Mikalson said that these additions, coupled with the four days that had previously been added to the end of the school year, will allow students to recoup at least six lost instructional days.

The new calendar changes include the following:

“The addition of extended days prior to spring break, rather than waiting until the end of the year, will give our students additional time with their teachers and better prepare those taking Advanced Placement, International Baccalaureate and state tests in the spring,” said Mikalson.

Mikalson added that eliminating or reducing parent-teacher conference time in lieu of added school days should not preclude open dialogue between families and their students’ teachers. “Teachers will be communicating with parents and guardians about student progress around mid-April,” he said. “As always, we encourage families to contact teachers at any time to check their student progress; communication is not limited to just conference time.”

The 2016-17 school calendar changes come after extreme accumulations of snow in the Bend, La Pine and Sunriver areas prompted district officials to close schools for several days in January to allow for significant snow removal from school roofs and building assessments by structural engineers.

Mikalson said that he hopes this will be the last calendar change for the 2016-17 school year, but that unforeseen events could result in additional changes. That said, he assures families that the school year will not extend past June 22 and that spring break will not be shortened.

A summary of the changes at a glance and a downloadable version of the revised 2016-17 School Calendar are available at www.bend.k12.or.us/201617revisedcalendar

DATE CHANGES: Students WILL attend school on February 3. There will be NO SCHOOL on Friday, February 10.

The semester will be extended by one week. This is a calendar change to allow for the recovery of five instructional days to first semester. Please note that the ‘no-school’ day will now occur on Friday, February 10, instead of Friday, February 3. This will allow teachers time to complete grading on February 10, as the end of the first semester has been moved back to February 9. (This change also applies to La Pine Middle and La Pine High School, which are on trimesters.)

The end of the school year will be extended by four days.

Students will have a full school day on Friday, June 16. Students will be released on the School Improvement Wednesday schedule on Thursday, June 22.

Graduation dates will not change.

Bend-La Pine Schools’ students are fortunate to receive exceptional learning opportunities every day in our schools. We believe that it is important that we make up for lost instruction time by adding school days back to our calendar.

To date, a record five school days have been canceled district-wide this school year due to hazardous weather – something we believe has never happened in the 130-year history of our district. To put this in perspective, in the 20 years between 1989 and 2009 we only had five district wide school closures. The same was true between 2011 and 2015, just five closures. This year has been quite an anomaly.

A summary of the changes at a glance and a downloadable version of the revised 2016-17 School Calendar are available at www.bend.k12.or.us/201617revisedcalendar

Thank you for your continued support of our students and staff. We appreciate you.